Clearly, good taste is not in great supply.

If you grew up with Hot Wheels, you may at one brief moment in your life wished to one day own a real-life version of the toys you played with. However, it seems that not everyone grows out of this phase and some eventually make their childhood dreams come true, even if those dreams are incredibly obnoxious. The Hummer H2 is a monument to tasteless excess in standard form, but although the new GMC Humme EV will aim to change that pervasive notion, the one you see before you aims to keep it alive. Worse still, the owner (who currently has it listed on eBay) is actually getting offers from other members of the public.

It's a 2003 model that was customized by Aim Industries and boasts custom House of Color paint, an 18-inch bolt-on lift kit, 20-inch Weld Racing Dagger 8 wheels, and various chrome accents including missile-shaped side steps. The dash also features a seven-inch motorized retractable screen while rear-seat passengers get their own displays. The rest of the interior is also "upgraded" with a unique interior finished by Classic Soft Trim. As is common of builds from the early 2000s, six 10-inch subwoofers in a custom enclosure are included and there's also a stainless exhaust system.

The owner claims that the entire package makes this "truly the baddest H2 ever built". Sorry buddy, but it's actually the worst. Of course, none of this could have been cheap, but it did land the obnoxious SUV a feature on the cover of Truckin Magazine in September 2004. This kind of overt modification style was in vogue back then, but it's far less appealing today.

Nevertheless, if you can buy a flying car or a Ferrari engine on eBay, it shouldn't be a surprise that you can buy a real-life Hot Wheels toy - even one with a chromed and fake machine gun protruding from the hood. At the time of writing, three bids have been made with the highest at $55,200. However, that's not enough to meet the seller's reserve. We wouldn't be surprised if the current owner has overestimated how many people would like this thing and how much they'd be prepared to pay for it, but whatever happens with the sale, we hope to never, ever see this vehicle again. Send eye-drops ASAP. 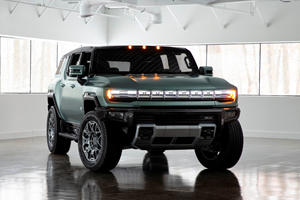