Someone Actually Put This Ridiculous Widebody Kit On Their PT Cruiser

We're as shocked as you are.

The Chrysler PT Cruiser was one of the most successful and ugliest vehicles of the past 15 years. It was also pretty damn unsafe, but that's a conversation for another time. Anyway, the PT Cruiser already looked odd enough before Bulgaria's Carbon Motors-the American company by that name is no more-got a request from one of its customers. We don't know how it was worded but it involved a bunch of leather being added to a PT Cruiser sporting a widebody kit and a paint scheme that is sure to burn some eyes.

The widebody kit was added before Carbon Motors got its hands on the interior. It widens the car to a little over six feet (two meters). In addition to the widening the backseats were dropped in favor of a bed, making this PT Cruiser into a little ute. The Carbon Motors interior isn't exactly awful, save for the steering wheel. Just about everything that was covered in plastic now sports leather, including the pillars and custom center console. The digital camo paint scheme is another story. The heart wants what it wants, but we highly doubt this custom job will have many fans outside of its owner. Still, it's a great way for Carbon Motors to get its name out there in the increasingly crowded tuning world. 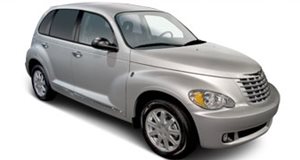