The F1 star has made a VERY decent return on this particular purchase.

In a bid to lower his carbon footprint, Lewis Hamilton has decided to let go of his internal combustion car collection, of which this bespoke Pagani Zonda LH760 is included. As reported last month, Hamilton was able to find a buyer for this car but the price was not disclosed. A report out of Italy reveals that this transaction was in the region of €10 million, which is roughly $11.3 million.

According to Quattroruote, this would see the British Formula 1 star net a profit of about $8.7 million. While quite an eye-watering number, it's still nowhere near the $23.65 million figure attached to one of the three Zonda HP Barchetta models from 2018.

Hamilton's example is based on the 760 RS but bears LH in the name because it was a bespoke build that catered to his taste. When the sale took place, it was revealed that the new owner was also from the UK but it is not clear whether they would be keeping the Zonda in that area.

The dark purple example employs an AMG-sourced 7.3 liter V12 that produces 760 horsepower which is delivered to the rear wheels via a six-speed transmission. Hamilton was last seen driving this car in August 2021 as he was on his way to a yacht party in Monaco, together with Samuel L. Jackson.

He came under fire for this because it was after he had declared to reporters that he would no longer drive cars that did not possess electrification. In the seven years that he had this car, it is reported that he only managed to cover 620 miles.

In a previous interview, Hamilton told reporters that he doesn't drive any of the cars that he owns apart from his all-electric Mercedes-Benz EQC. It's because of this, that all future cars added to his collection will be, at the minimum, hybrid-electric options such as the upcoming Mercedes-AMG One but fully EV models are noted to be his preference. 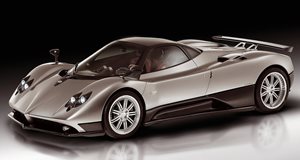