Several Aston Martin models will make their US debut at Pebble Beach.

We don't get a very clear look at the Baijin Edition in Aston Martin's teaser photos, but the automaker says the car features striking enhancements such as a bespoke Bijan Yellow exterior paint finish including a subtle paisley pattern ghosted into the hood paint. Inside, the interior is finished in Bijan's distinct soft alligator leathers.

Like the standard DBS Superleggera, power will presumably be provided by a twin-turbo 5.2-liter V12 producing 715 horsepower and 664 lb-ft of torque. Pricing details haven't been confirmed, but the DBS Superleggera coupe starts at $305,000 while the Volante will set you back $329,000. No doubt the new special edition model will be even more expensive.

The DBS Superleggera Baijin Edition isn't the only new model debut Aston Martin has planned for Pebble Beach, however. Both the Valhalla mid-engined hypercar and the limited-edition DB4 GT Zagato Continuation will make their North American debuts at the show. The Valhalla will debut on Friday, 16 August at 'The Quail, A Motorsports Gathering.' After that, it will be on display for the rest of the weekend at the 'Aston Martin Club 1913' event space. The DB4 GT Zagato Continuation, on the other hand, will make its North American debut on the Monterey Peninsula along with a 40 percent scale model of the DBS GT Zagato. 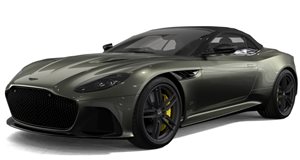