The full reveal of the upcoming BMW M6 Convertible is near, as these latest spy shots show testing is in the final stages.

Our spy photographers have just snapped up some new photos of the upcoming BMW M6 Convertible out doing what appears to be some final testing. Although we don't know when exactly it will have its official debut, it's clear that testing is almost complete due to less camouflage than usual. Instead of the typical black test mule, this one is more of a metallic grey and we have a clearer view of the front-end styling. Power will come from a 4.4-liter twin-turbocharged V8 that will produce around 552hp and 502lb-ft of torque.

It will be mated to a seven-speed M Double Clutch transmission. We've also heard that a traditional six-speed manual may also be made available for the U.S. market. Both the M6 Coupe and Convertible will differ from the standard models by not only the engine, but also from unique front and rear-end styling and larger alloy wheels. Pricing will also be north of the 650i's $83,000 base price. We're expecting a full reveal of both the coupe and convertible in the coming weeks. 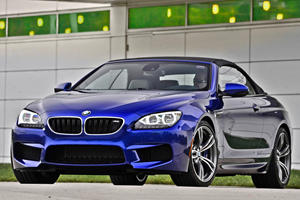