New spy photos have been shot of the redesigned 2013 Hyundai Genesis Coupe.

Hyundai announced some time ago that the 2013 edition of their Genesis coupe would receive a facelift and with these new spy photos, we can make out some of the design changes already. The Genesis coupe was spotted a few days ago performing some hot weather testing in California's Death Valley and now it has been shot circling an unnamed test track. The new coupe features new styling on the front and rear bumpers, some new wheels and a revised interior.

Power comes from a 2.0-liter couple with Hyundai's eight-speed automatic transmission. There are also rumors that a V8 option will be made available. The 2013 Hyundai Genesis coupe is set to make its debut at the 2011 Los Angeles Auto Show in November. Sales will begin after its showing at next year's Detroit Auto Show in January. Photos: CarPix. 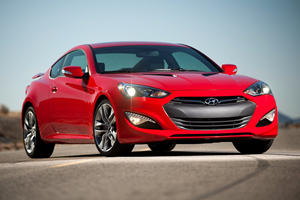