Sporty New Hyundai Ioniq 5 N Spied Back At The Nürburgring

By now, it's safe to say that Hyundai's N division has proved itself several times over. The tuning arm, which brought in Albert Biermann of BMW fame, has churned out some excellent cars, like the Veloster N. Back in July of last year, we predicted that the brand's tuning arm would soon be having a go at the Hyundai Ioniq 5.

Well, we were right, with spy shots showing a prototype test mule first, and then some Nürburgring testing of a fully camouflaged unit some time after. Now, the Ioniq 5 N is back at the Nordschleife for more testing.

Outwardly, it appears that (for now) the new go-fast Ioniq won't look terribly different from its more pedestrian sibling, which shares a platform with the Kia EV6. Hyundai has done some work, most of which is largely still hidden by the camo livery. Most obvious are those larger wheels fitted with some very sticky-looking tires, as well as larger brakes as compared to the base car.

Just above those wheels, we can see the subtly flared fenders of the Ioniq 5 N, something that was present when last we saw the car. They do help give the car a more aggressive look, and will hopefully stick around when the model makes its debut, likely for the 2023 model year. Finally, the lowered suspension will likely be accompanied by more aggressive front and rear fascias. However, we can't quite tell what changes have been made thanks to the camo wrap.

If current rumors hold any truth, the new 5 N will be powered by the EV6 GT's upgraded electric powertrain. In Kia spec, the electric motors turn out 585 hp and 546 lb-ft of torque. Healthy numbers to say the least, with the Kia hitting 60 in a mere 3.5 seconds.

Power aside, we're hoping Hyundai doesn't drastically change the look of the Ioniq 5. It's already one of the most recognizable cars on the road, and messing with that formula too much could ruin things for the sporty EV. Thankfully, it doesn't look like that's the case, though we'll have to wait for the camo to disappear to know for sure. 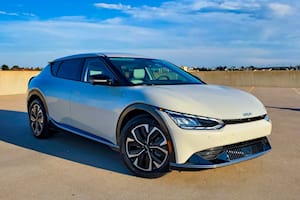 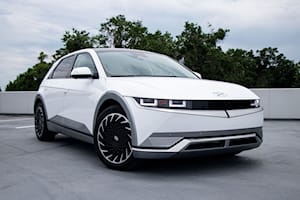