The Scuderia Spider looks sensational thanks to the Canadian tuners.

SR Auto Group has been featured several times on CarBuzz for their sensational work on high-end automobiles. Their work on the Ferrari F430 Scuderia Spider is no different, as the 16M looks better than ever thanks to the crew from Canada's hard work. The Vancouver-based boys have added a set of super aggressive and sensationally large 20-inch PUR 2WO forged monoblock wheels. The 3-piece Modern Black-finished wheels contrast brilliantly with the 16M's silver exterior finish.

Coupled with several raw carbon fiber parts like the side skirts and a black stripe running down the middle, the F430 looks better than ever. The F430 Scuderia Spider 16M was built to commemorate Ferrari's 16 Formula One Constructor's World Championship wins back in 1998 and is powered by the F430's 4.3-liter V8. The engine found in the Scuderia Spider 16M has been enhanced through a series of tweaks and upgrades for more power, producing a total output of 503 horsepower and 350 pound-feet of torque. The 16M is capable of reaching a top speed of 196mph and reaching 62mph from rest in only 3.7 seconds. 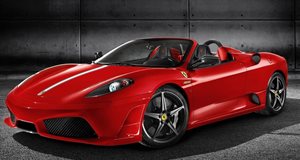