The name Ferrari instantly conjures up images of fast coupes, glorious V8 and V12 engines, and phenomenal handling. The company creates some of the greatest cars in the world, and although the days of naturally aspirated Fezzas may be gone forever, the F8 Tributo is just one of many examples that prove Ferrari still knows how to make a bloody good supercar. But what if you must have an unassisted V8 howl and you want all your mates to experience the same pleasure. Well, there is an unconventional solution. An Australian site has a Ferrari 360 Modena for sale, but it's listed for more than a new Roma. Why? Because it's the only one of its kind in the country.

The car in question started life as a regular 360 Modena back in 2003, but nine years later, a man named Scott Marshall decided to create a special limosuine unlike anything else Australian shores had ever seen before. As you may have guessed, this isn't the first time the 360 has been stretched and repurposed for bachelor parties, weddings, or any other occasion where you might normally make use of a limo. In this case, however, there's been quite a bit of care taken to ensure that this former supercar is now a comfortable stretch limo, including easy-access gullwing doors on the rear. The chassis has obviously been reinforced, but the man who built it also fitted air suspension for better comfort and less chance of getting beached on bumps.

The 3.6-liter V8 remains, but now it's far away from the driver. The conversion was so impressive that the car got a feature in Street Machine magazine. However, since the attached photos were first taken, the gated manual shifter has reportedly been swapped out in favor of an automatic from a Subaru Legacy GT. Before you recoil in horror, just remember that this is already a very unconventional Ferrari. In fact, the 360 seems to be quite a popular car for wacky conversions, with someone building a speedster version too. Obviously, this limo isn't intended for daily driving and is being pitched at limousine business owners, but if you're keen, you can buy it too. How much does it cost, exactly? In our money, it works out to a whopping $283,000+. We'd rather buy a Rolls. 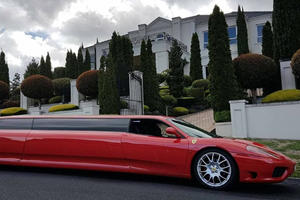 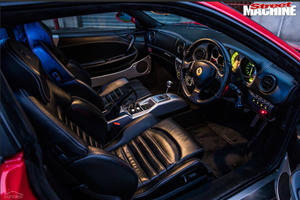 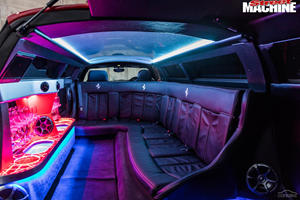 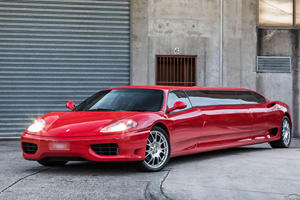 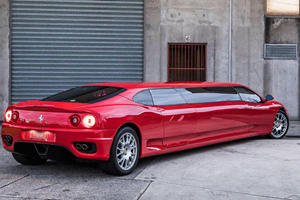