Supercars On A $50,000 Budget: You Need A Chauffeur For This Level Of Luxury

Followers of our "Supercar On A $50,000 Budget" Series, will know that not every car we pick is a "supercar" in the traditional sense. Sometimes we choose cars that have unbelievable comfort, unbelievable power, or even unbelievable reliability. This week's car cost a whopping $311,700 when it was new back in 2005, but can now be purchased for less than a new Kia K900. We never thought it would happen, but we found a 2005 Maybach Type 57 for less than $50,000.

The Maybach that we found is indeed under $50,000, by $5. The asking price is $49,995 which really amazes us considering what you get for your money. Before we even get to the engine, it is amazing to think about what comes inside. There are two screens with a DVD player, which can also have a game console plugged into it. That doesn't sound that special though, a Chevy Tahoe can have that. However, a Chevy Tahoe won't have 21 speakers, two independent air conditioning units, a remote control, two cell phones, champagne flute holders, a built-in umbrella, and 80 pieces of wood veneer. There are also 20 memory buttons for the four leather seats.

Even a brand new S-Class can't quite match the level of luxury that is found here. The new Mercedes-Maybach S600 costs $191,300 (perhaps because it's not a full Maybach model?) and the old car is actually more powerful than its offspring. Back in 2005, the Type 57 came with a 5.5-liter V12 engine with 543 horsepower and 664 lb-ft of torque. If 12 cylinders weren't enough, two turbos dished out 18.9 psi of boost. Even though this car was heavier than a Chevy Suburban, it had a better power-to-weight ratio than a Honda S2000. It could also reach 60 mph in just 4.9 seconds. Amazing considering the car has to carry two televisions and curtains, essentially a living room on wheels.

So how could this ultimate luxury car ever reach the low price of $50,000? Well, having 96,595 miles on it could have something to do with the price. It is rare to see such an expensive car nearing the 100,000 mile mark, but this is a car that you get chauffeured around in, so we can imagine that the miles can be racked up pretty quickly. The Carfax shows five owners, although due to the way things are logged, it appears that the first owner simply moved, causing the report to register two extra owners. It seems like the car has had all of the services that it needs, which in this case is many. This is still a $300,000 car, the maintenance is going to be astronomically expensive.

If you are interested in buying this Maybach, it's currently for sale for $49,995 at Fields BMW in Winter Park, Florida. Get there quick, because we doubt that a $50,000 Maybach will last long. 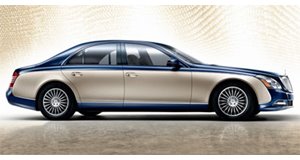