Suzuki Grand Vitara Replacement is Too Little Too Late

For the US, at least.

Suzuki cars left the US market not long ago because, well, hardly anybody bought them. It built decent enough cars, but they were nothing special. Perhaps one of its most well-known models was the Grand Vitara, which at one time back in the day was sold as the Geo Tracker, and later the Chevy Tracker. That nearly two decade small SUV is still being sold in many parts of the world, but not for much longer.

Our spy photographers recently snapped some images of its alleged replacement out testing in the snow. Supposedly based on the iV-4 Concept shown at Frankfurt in 2012, this so far unnamed small SUV will hit the European market in 2015. It'll also likely go on sale in Asia at some point. A four-wheel-drive system is expected and Suzuki claims it'll have the lowest C02 emissions in its class. Fine, whatever. Even if Suzuki cars were still in the US, it seems unlikely this thing would ever find an audience. US buyers will just have to stick with Suzuki motorbikes and jet skis, and that's probably for the best.

Check out the best compact SUV. 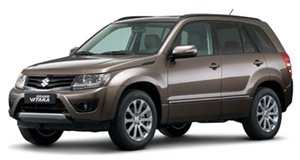