We already said goodbye to the iconic Lamborghini Aventador with the 769-horsepower Ultimae. It's the final incarnation of the classic V12 before it is bolstered by electrification. Another memorable farewell is coming from the Italian marque in the form of the final Huracan, but whereas the Aventador Ultimae was a dedicated supercar for the road and track, the new Huracan Sterrato is essentially an off-road supercar.

It's a bizarre fusion of seemingly conflicting concepts but that's precisely why the Huracan Sterrato is so intriguing. The Sterrato has been spied before but Lamborghini has now released a fresh batch of teaser images and an accompanying video of the Sterrato playing in the dirt.

The latest video of the Huracan Sterrato is a continuation of the "Beyond The Concrete" series which celebrates the car's off-road abilities. This time, the driver heads off the smooth concrete and along a dirt track, seemingly at the same high speeds, to meet her surfing partner on the coastline.

No other information about the Sterrato was shared, but the howl of the 5.2-liter V10 reverberates through the great outdoors just as aggressively as it does in the city. Power outputs have not been confirmed but they could match the Huracan Tecnica with its 631 horsepower and 417 lb-ft of torque. Unlike every other Huracan before it, the Sterrato sits far higher off the ground and it has been spotted with all-terrain tires.

All-wheel drive makes perfect sense in this application, but the rear bias of Lamborghini's system should still make the Huracan Sterrato enormously fun to drive. Unlike previous sightings, this Sterrato is wearing a blue livery with the words "brave," "authentic," and "unexpected" pasted on the hood and doors. It has roof rails for better practicality and a pair of spotlights in front, and the wheels are of a different design to what we've seen in some other spy shots. The ram air scoop on the roof is also visible here from certain angles.

One brief shot of the cabin shows a sporty steering wheel that looks to have an Alcantara wrapping, and a trio of gauges displaying key information in the center console.

The Huracan Sterrato concept was revealed back in 2019. Based on the Huracan Evo, it comes with four-wheel drive, four-wheel steering, a modified suspension with torque vectoring, and dynamics calibrated for off-road driving. Its ground clearance is improved by 1.85 inches and underbody reinforcements provide additional protection over harsh terrain. It remains to be seen what the production model's final specifications are, but it looks like an absolute riot.

Porsche is working on its own supercar-cum-off-roader with the 911 Safari, and it also features a visibly raised ride height along with other mechanical and aesthetic changes to toughen it up. We've seen many off-road versions of the 911 before, however, whereas the Huracan Sterrato is uncharted territory for Lamborghini's mid-engine supercar. We're hoping to see the camo-free Sterrato before the end of the year. 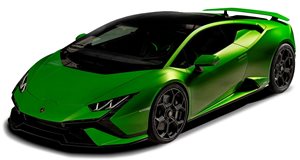