Teased: Mercedes-Benz Gives a Taste of its X6-Rival Crossover

Mercedes-Benz is planning a rival to the BMW X6 Crossover that will begin production in 2013.

According to a leaked photo out of the Mercedes-Benz plant down in Tuscaloosa, Alabama, Mercedes-Benz will be creating a 'coupe-like crossover' to lock horns with the BMW X6. The photo, taken by what is most likely a cell phone, shows a covered-up crossover from what allegedly was the announcement ceremony at the aforementioned southern plant. The photo was first uploaded to Twitter from user @Dawn_Kent, which fellow car guys Jalopnik nicked and ran on their site.

You can clearly tell from the shape underneath the sheet that it is a tall-riding crossover, probably the new model that Mercedes-Benz announced would be built at the plant late last week by 2015. Previous reports indicated that the possible crossover would be named the 'MLC' or 'GLS' and run on the 2012 Mercedes-Benz M-Class SUV's platform, meaning engines like an AMG twin-turbo 5.5-liter V8 or a diesel-electric hybrid could be available. If the photo alone isn't proof enough that the German automaker will build a new model at the plant in Alabama, Merc announced the other day that a $350 million expansion to the said plant will be undertaken shortly. 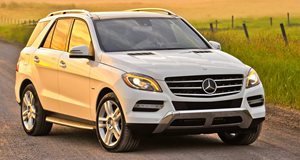