Teased: This Is The All-New Mercedes-Benz T-Class

This week, it was announced that Mercedes-Benz will be drastically reducing its North American model lineup, as it had simply become too convoluted. Among the models facing the axe will be coupe/convertible variants of the Mercedes-Benz C-Class and E-Class.

However, this doesn't mean that the brand won't be expanding into other segments and markets. It has just teased a new T-Class, which will be a compact city van aimed at families and a group defined as active leisure enthusiasts. It will slot in below the brand's Metris (sold elsewhere as the V-Class), and Mercedes promises levels of safety and connectivity that will align with other models in the brand's lineup.

The single teaser image gives away very little, with only the van's silhouette visible, but from what we can see, the T-Class appears a bit more rounded than the bigger Metris Passenger Van. In front, there is what looks like an especially large iteration of the three-pointed star badge on the grille, and near to the back, the belt line kicks up. That's about it as far as the teaser goes.

Mercedes did add that the compact van will have wide-opening sliding doors on both sides, which should make access easier. In addition to conventional powertrains, an electric version will also be offered.

"With the new Mercedes-Benz T-Class, we will offer a vehicle which makes it possible for families and those with active pastimes to step into the Mercedes-Benz world," said Marcus Breitschwerdt, who heads up Mercedes-Benz vans.

It was almost exactly a year ago that Mercedes-Benz confirmed it would replace its current Citan (sold in Europe but not here) with a new minivan, and it seems the T-Class is just that. While it would be the perfect foil to the Ford Transit Connect Passenger Wagon, we doubt that the T-Class will make it stateside when it arrives in the first half of 2022, but who knows? 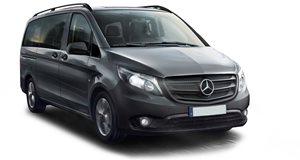 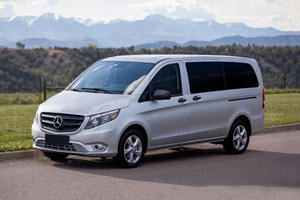