Porsche tuning specialist TechArt is bringing a trio of Porsche individualization programs to next month's Essen Motor Show in the form of a Boxster, 911 GT2 and a 911 Carrera S Cabriolet. We reported on the Boxster a couple of weeks ago, revealing an aero kit, new wheels, GT Silver bodypaint and refined interior, while full details of the 911 models will be announced during the motor show. Some tantalizing initial specs have been divulged, however, in preparation for the European equivalent of SEMA.

The Techart GTStreet RS will apparently be one of the fastest and most powerful cars at the show thanks to a power kit that raises output to a lethal 700 horsepower and 634 pound-feet of torque (up from 530 hp and 502 lb-ft). Performance details for the 911 Carrera S are being kept under wraps. Techart did disclose that it will wear a unique aero body kit tested in a wind tunnel, which includes a front spoiler that reduces lift on the Carrera's front axis by 5kg at 87 mph, and a rear spoiler that provides an additional 17.5kg of downforce at the same speed. We should get more details and pictures when the show kicks off on 1 December. 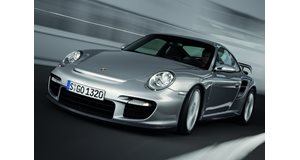