The arrival of the Tesla Model 3 caused Volvo to change its strategy halfway through development.

Better late than never. Volvo finally joined the EV party back in October with the unveiling of the XC40 Recharge, the Swedish automaker's first-ever fully electric vehicle. By 2025, Volvo estimates 50 percent of its sales will be all-electric, with hybrids making up the other 50 percent. Volvo was feeling confident about its first EV, but Volvo Chief Technology Officer Henrik Green has revealed how the arrival of the Tesla Model 3 forced Volvo to rethink its strategy halfway through the vehicle's development cycle.

"We increased the battery size," Green told Automotive News Europe. "We thought we had a good balance between cost and size before, but when we saw that come out we said, 'Maybe they have a point here'." Originally, the battery powering the XC40 Recharge was going to have a kWh capacity in the 60s, but the range-topping Tesla Model 3's 70+ kWh battery led to Volvo using a 78 kWh battery instead to make the XC40 Recharge more competitive.

"We put in some extra modules. It moves the price point up a bit but it adds range so we would be in the same area as the Model 3," Green explained.

With this setup, Volvo says the XC40 Recharge will have a driving range of around 400 kilometers based on WLTP testing. That means the EPA range should be around 200 miles, which still falls short of the Tesla Model 3 Long Range that can last 348 miles on a single charge. "I wasn't as confident when we made this decision three years ago," said Green, referring to the decision to make the XC40 Recharge Volvo's first battery-electric vehicle.

"I thought it was much more of a gamble, but now I think it's in perfect position." That's because the Volvo XC40 Recharge will be the only full-electric SUV in the 40,000 to 60,000 euro price range when it arrives on the market next year. Pricing hasn't been announced yet, but the Volvo XC40 Recharge is expected to cost around the same as the Polestar 2, which will be sold for around $44,000 to $63,000, and undercut its rivals such as the Jaguar I-Pace, Tesla Model X, and Mercedes-Benz EQC. 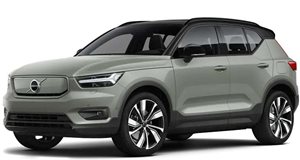