Instead, Porsche will show something else at Geneva.

Last week, a rumor hit the web claiming that Porsche may just unveil a new version of its beloved Turbo: the 911 Turbo Targa. We'll admit, the idea of up to 560 horsepower and that retracting roof sounded great. Unfortunately, it doesn't appear to be happening (just yet, at least). Autoblog managed to dig deeper into this, and spoke to Porsche's North American Product Communications Manager, Nick Twork.

His response to the Targa Turbo rumor: "Totally false." Bummer. Porsche, however, has just announced that it will be instead unveiling the 919 Hybrid, its new LMP1 race car that'll soon take part in the World Endurance Championship, and the 24 Hours of Le Mans later in the season. It's the car that former Red Bull F1 driver Mark Webber will help pilot. In addition, Porsche will also display the 911 RSR racecar. We'll have additional details and photos for you live from Geneva later this week. Stay tuned. 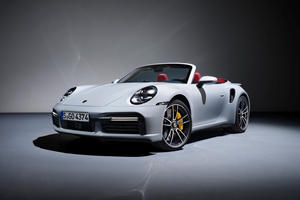