The Audi TT Is Officially Dead

But the R8's future remains uncertain.

We've got some bad news for fans of sporty coupes: after being on sale for over 20 years, the Audi TT is officially dead. The announcement was made by Bram Schot, the brand's chairman of the board of management, during Audi's annual general meeting this week. Just as rumors have suggested, Audi's entry-level sports car will be replaced with a new electric model. It's a sign of the times, sadly, as sports cars aren't generating strong sales like they used to and because Audi is aiming to overtake Tesla as the leading premium EV brand.

"We want to have the strongest range of electric models amongst the premium competitors," said Schot. As a result, Audi is aiming to sell around one million electrified cars each year by 2025, with plug-in hybrids and electric cars accounting for 40 percent of all deliveries.

Few details were shared about the Audi TT's demise, but the chairman confirmed it will end production "in a few years" and be replaced with an electric car that's "emotive" and "in the same price range." For reference, the Audi TT coupe starts at $44,900, while the roadster will set you back at least $48,400. Since the TT just had a mid-cycle facelift, the sports car is expected to stay on sale until 2022. Since the TT is based on the Golf, the TT's electric replacement could be underpinned by Volkswagen ID.3's MEB platform, but nothing is official yet.

While the iconic TT will live on into the future as an electric car, the future of Audi's flagship supercar, the R8, is less certain. Reports have suggested the R8 will live on as an electric supercar, and while Schot questioned if the R8 still needs an internal combustion engine during his speech, he acknowledged that discussions about the mid-engine supercar's future are still ongoing. "Do we need a successor with a combustion engine? Does this fit in with our vision? The discussion will give us an answer to that," he said.

While we're sad to see the Audi TT get the axe, its death isn't that surprising when you look at the sales figures. Last year, Audi sold just under 1,300 units in the US compared to peak sales of around 12,000 units in the early 2000s. Whether its electric replacement retains the TT nameplate remains to be seen. 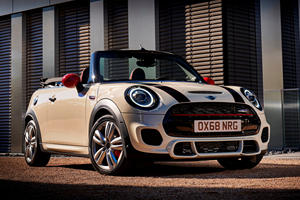