The Best And Worst Of The Grand Tour Episode 2: Operation Desert Stumble

After a promising start, The Grand Tour Operation Desert Stumble was the show's difficult second album. Focusing on the presenters joining a special forces team in Jordan, the second episode has garnered a mixed response compared to the universal praise of the show's debut, with many viewers criticizing its lack of actual car content. Here are our best and worst moments from The Grand Tour episode 2: Operation Desert Stumble.

The Best: The Aston Martin Vulcan The V12 Vulcan is Aston Martin's scariest supercar yet, and Clarkson's road test perfectly captured this, striking a perfect balance of being informative, entertaining and beautifully shot. To quote Clarkson: "I'm not going to say it's like being attacked by a bear, but it is like being in a room with a bear that is thinking of attacking you."

You Spin Me Right Round Watching James May being an unwilling passenger alongside a professional driver always makes for good television, and his introduction to South Africa's spinning sport was no exception where people drive RWD cars in circles until the tyres explode. It was original, entertaining and gave insight into the country's car culture. Those few seconds of May's genuine reaction when the driver stepped out of the moving car were funnier than many of the show's scripted jokes.

The Cinematic Car Chase Part of The Grand Tour's appeal is the obscene amount of money being thrown at it. In the last episode, we had the Mad Max Fury Road-esque intro. In this episode, we get a cinematic car chase full of gratuitous gunfire and explosions, with Clarkson, Hammond and May evading terrorists in an Audi S8 – the movie star's car of choice, according to Clarkson, having appeared in The Transporter, Taken and Ronin. The shot of May firing an assault rifle out of a moving car is worth watching alone.

The Worst: Operation Desert Stumble The show's main feature was fun to watch as a parody of Tom Cruise's Edge of Tomorrow, but it was very contrived and barely related to cars. It was like watching three middle aged men acting out a Call of Duty game, as the team were tasked to infiltrate a town, get to a plane, take out some terrorists, rescue a VIP and escape to an embassy. They certainly looked like they were having fun, but it dragged on far too long. Also, while pretty hilarious, did we really need a gag involving Clarkson being implicitly molested by terrorists?

The American Replacing the silent Stig with a vocal racing driver may keep the BBC's lawyers happy, but Nascar driver Mike Skinner's appearance in episode 2 was just as jarring as the first episode with his incessant trash talking in every car. Less talking, more driving please.

Celebrity Brain Crush Seriously, this isn't funny anymore. Watching celebrities "die" was a mildly amusing way to kill off Top Gear's Star in a Reasonably Priced Car in episode 1, but it doesn't need to be a recurring joke every episode. As soon as they announced Charlize Theron as a guest, we all knew what was about to happen. And it did. So, what did you think of The Grand Tour's sophomore episode? Let us know in the comments.

Pricing
Tesla's Constant Price Hikes Are Getting Out Of Hand

Spy Shots
Best Look Yet At The Audi Q6 e-tron 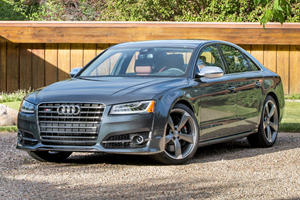