Lamborghini only made 15 Reventon Roadsters, and this new car-video team has gotten its hands on one of 'em.

Some of our favorite car videos come from the UK, and now there's another. It's called The BHP Project, and it could use some work, but we'll allow them their teething problems, because in its first video, The BHP Project has driven one of the rarest and most exclusive supercars in the world. That'd be the Lamborghini Reventon Roadster. Forgot about that one? It was based on the Murcielago, with the engine from the SuperVeloce and styling cribbed from an F-22 Raptor fighter jet.

Lamborghini only made 20 Reventon coupes and another 15 roadsters. The owner of this particular example (one of only three with right-hand drive) owns one of each. It cost £1.2 million new, but is probably worth even more now. In other words, you're not likely to see one parked outside your house, so check out the video below for a closer look. 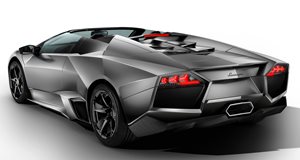