The Chevrolet Sonic Is Dead And Nobody Cares

Not even rental fleets.

We've known this was going to happen for several months, but only now has General Motors officially confirmed that the Chevrolet Sonic subcompact sedan and hatchback is officially being discontinued. At the moment, examples are still rolling off the production line at GM's Orion manufacturing facility in the Detroit, Michigan area, but a company spokesperson has just confirmed with Electrek this will soon change.

"We notified Chevrolet dealers of our plans to end production of the Chevrolet Sonic in October, due to declining demand," the official said. "This action also paves the way for the Orion Township Assembly Plant to prepare for the production of the refreshed Bolt EV and Bolt EUV, which will go into production in 2021. With this shift, it would make Orion an all-EV manufacturing facility, with the ability to build ICE vehicles as needed in the future."

The Orion plant will actually be the automaker's second facility to switch to an all-electric vehicle lineup, the first being the Detroit-Hamtramck Assembly plant. It built its last internal combustion vehicle last February and is currently undergoing a major re-tooling in order to prepare for GMC Hummer EV production, slated to begin in the fall of 2021. Once the reborn Hummer is successfully launched, this facility will then begin building the self-driving Origin, a product of GM's Cruise autonomous-vehicle division.

All told, GM has at least a dozen EVs in various stages of development and the plan is to launch a majority of them in the next two years.

Once the Sonic will be out of the picture, Chevrolet, a brand once synonymous with building family sedans, will be reduced to only one, the Chevy Malibu. It too, in fact, is also rumored to be on borrowed time and likely won't live on past the 2023 model year. But the reality is that the world of mobility is changing rapidly with electrification and self-driving technologies.

GM can't afford to be left behind and the Sonic is nothing more than a representative from the past that only has a few months left to live. 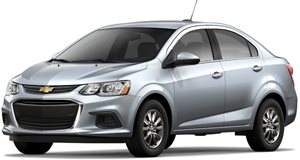