The FBI Now Has A Ford Mustang Mach-E

Protecting the nation, swiftly and silently.

Ever since it was introduced, the Ford Mustang Mach-E has proved popular with consumers across the United States. Reasonable pricing, good looks, and plenty of performance have contributed to strong sales. But it seems the electric crossover isn't just a hit with civilians as the FBI has apparently also been charmed by the Mach-E.

Spotted by Reddit user skyflyer8, the example seen below looks rather fetching in its law enforcement livery and black paintwork. If you're wondering what the FBI police is, you're not alone - we were stumped, too. According to the government agency, this little-known force is tasked with protecting the FBI's interests, securing federal property, dealing with threats against employees, and conducting investigations around various facilities.

Known as the protectors of those who protect America, Ford should be flattered that this crime-fighting force chose the Mach-E as a patrol car.

The vehicle in question appears to be a GT variant, with 480 horsepower and 600 lb-ft of torque on tap. That should be enough performance for when officers need to respond to an emergency or chase after bad guys. With a claimed maximum range of 270 miles, the patrol car should be entirely usable for a day's work.

The adoption of electric vehicles by law enforcement and government agencies is nothing new. In December 2021, President Biden signed an executive order regarding the procurement of EVs for the federal vehicle fleet. The government is hoping to only purchase emissions-free vehicles and replace 600,000 units by 2035.

But the FBI isn't the only crime-fighting agency with a hankering for the electric Mach-E. After passing the stringent police testing program, the battery-powered Ford was cleared for official duty. The NYPD wasted no time in obtaining an example for patrol duty and has plans to purchase an additional 100 examples for future use.

Keen to cash in on this new trend, Ford is already offering a police-ready variant of the F-150 Lightning. Naysayers may chuckle, but the electrified truck has been specially prepared for use by law enforcement. Inside, you'll find heavy-duty cloth seats with steel intrusion plates in the seatbacks, vinyl-trimmed rear seats and carpeting, and a strengthened instrument panel.

Two versions will be offered; a Standard Range (SR) and Extended Range (ER). The former produces a substantial 452 hp and 775 lb-ft, allowing for rapid responses in an emergency. Should a department require even more motivation, the latter boasts the same amount of torque, but even more muscle, with 580 hp up for grabs. What's more, the ER is capable of towing up to 10,000 lbs.

While the change to electric vehicles is inevitable, some police officers have criticized EV patrol cars. A Washington-based department said its Tesla Model Y cars aren't suited to the demanding working conditions. 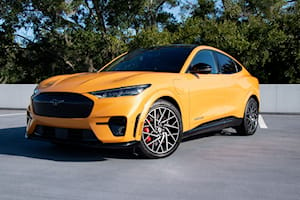