The Final Bugatti Divo Has Been Delivered

The last of a total of 40 cars has found its home in Europe.

Before Bugatti started work on the now famous Veyron hypercar, the brand was better known for its exquisite coach-building. The art of coachbuilding has all but disappeared in the modern world, but Bugatti, once one of the best in the business, sought to revive that part of its heritage three years ago when it initiated the Bugatti Divo project. Deliveries of the Bugatti Divo began back in August of 2020, with the first American delivery taking place at the start of this year. Now Bugatti's first coachbuilding project in the 21st century is drawing to a close, with the final example of the total of 40, finding a new home in Europe.

The final Divo takes on a traditional look thanks to a coat of Bugatti EB 110 LM Blue, a nod to Bugatti's last official Le Mans factory race car. The exterior also features matte gold metallic wheel rims and contrasting Blue Carbon. The interior of this Divo features French Racing Blue and Deep Blue as well as matte gray carbon elements. The Divo is a clear nod to the brand's tradition of coachbuilding: "I read a lot about it, took a look at the iconic bodyworks produced in the 1920s and 1930s, and began to wonder whether we could transpose this excellent asset to the company's modern era," Stephan Winkelmann recalls when he became President of Bugatti.

Unveiled at the Concours d'Elegance in Pebble Beach in 2018, the Bugatti Divo was the most expensive model at that time, with an asking price of five million Euros (around $5.9 million). "Upon seeing the Divo for the first time, the feedback from every single customer was extremely positive. The 40 vehicles had all been sold within a matter of weeks following the first customer appointment," recalls Hendrik Malinowski, Director of Sales and Operations.

The Divo, which was named after French race car driver Albert Divo, is a unique car in the sense that not a single of the 40 units produced is the same. Each Divo is bespoke, just as the coachbuilders of old would have wanted it. 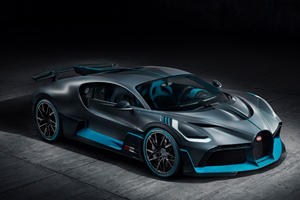