The Ford Bronco Raptor Is Mightier Than Expected

Its horsepower and torque ratings are higher than Ford predicted.

This is becoming somewhat of a trend for Ford: publishing output figures, only to have them exceeded by the production model. The Ford F-150 Lightning lineup exceeded its initial 426- and 563-horsepower estimates, producing 452 and 580 hp, respectively. Now that same thing is happening with the 2022 Ford Bronco Raptor. As a reminder, the Bronco Raptor uses a 3.0-liter twin-turbocharged V6 that was initially targeted to produce 400 hp and 430 lb-ft of torque.

Ford CEO Jim Farley took to Twitter to announce that those targets have officially been beaten: "The idea for Bronco Raptor was an Ultra4 racing-inspired Bronco built for high-speed off-roading & extreme rock crawling. The target was 400 horsepower. Now it's official: 418 hp + 440 lb-ft of torque. Congrats to the Ford Performance team for taking Built Wild to a new level!"

That's 18 hp and 10 lb-ft of torque more than expected from the twin-turbo EcoBoost V6. Those gains likely won't create a massive difference in performance, but any output increase is welcomed. This latest news puts the Bronco Raptor slightly closer to rival off-roaders like the Jeep Wrangler Rubicon 392 and Land Rover Defender V8. Both of those SUV features two additional cylinders (with the latter adding a supercharger), producing 470 hp and 518 hp, respectively. Ford hasn't completely closed the gap, but remember the Raptor is cheaper starting at $69,995, and the Raptor experience has always been about more than just headline performance figures.

News of the Bronco Raptor's output gains arrive just days after the official fuel economy ratings were announced, with these revealed to be lower than one may expect. Coincidence? Maybe not. Ford is clearly working to ensure that the hype surrounding this hotly-anticipated vehicle is sustained for as long as possible. As a reminder, the Bronco Raptor achieves just 15/16/15 mpg city/highway/combined. Those figures are pretty abysmal compared to the average crossover, but the Raptor's yearly fuel costs are predicted to be lower than those of the Jeep or the Land Rover. Combined with the newly announced power gains, the Bronco Raptor should be a compelling option in the high-performance off-road SUV segment. 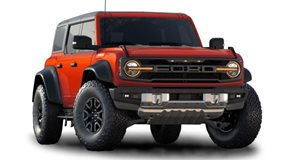