Oh, and it could be a diesel!

Almost one year ago Hyundai revealed its Santa Cruz compact pickup concept. It was well-received but that didn't mean it would see production. That being said, it looks like folks from the automaker want to see the Santa Cruz happen. Hyundai's vice president of product planning for North America, Mike O'Brien, seems really big on it. "We're very anxious to do with the idea," he told the outlet. That sounds like a ringing endorsement to us. Apparently the truck was the result of 18 months of work so it's not just a crazy concept made for funsies.

Aimed at a younger market, the Santa Cruz would mimic Honda's Ridgeline but on a smaller scale. Hyundai also wants to make the Santa Cruz its first diesel sold in America. This diesel would be a 2.0-liter turbo offering 190 horsepower. But as we all know, with diesels torque is king, especially with this engine sitting at 300 lb-ft of torque. Speculation is that it could share the Tucson's platform, meaning it wouldn't be a true body-on-frame, man's man pickup. Still, it would likely get good fuel economy, have decent power and be easy to drive. It would also allow Hyundai to get more money out of the Santa Cruz's platform. It's an ambitious goal but if Hyundai can accomplish it then it would have cornered what it believes to be a fast growing market.

What this market is exactly, we don't know. We say that because the Santa Cruz wouldn't exactly be a true light truck or a straight crossover. What we do know is that SUVs and light trucks are selling like crazy in America. So long as the Santa Cruz can compete somewhat in that not-so-crowded field it should do okay. Throw in a quirky design and potentially (hopefully) cheap price tag and Hyundai may very well be able to make some noise in the segment. Nothing is official yet, but this is one model we'll have our eye on in 2016. 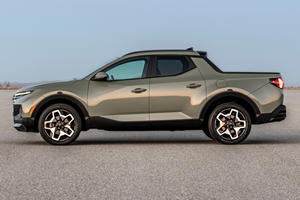