Does this mean it'll be President Trump's new daily driver?

There's been much talk lately regarding where vehicles are manufactured and the issue of tariffs. Some of the most seemingly all-American vehicles are, surprisingly, not always made in America. And vice versa. The Honda Accord has been built in Ohio for years. The Ford Fusion is now built in Mexico. Cars.com has just released its latest American-Made Index report that determines which cars are "most American" based on whether they're manufactured in the U.S., the amount of American parts and support the most American factory jobs.

This year's winner is none other than Jeep Cherokee, built in Belvidere, Illinois. Nearly 72 percent of its parts are domestic made, such as its engines and transmissions. Next up on the Top 10 list are the Honda Odyssey and Ridgeline, followed by (in order) the Ford Taurus, Chevrolet Volt, Honda Pilot, Acura MDX, Ford Explorer, Ford F-150, and the Chevrolet Corvette. Note that four out of the 10 vehicles come from Honda/Acura while Ford makes up a good chunk of the list as well. Cars.com conducted a recent survey which found that 71 percent of American consumers believe buying domestic "significantly or substantially" contributes to the U.S. economy.

Interestingly, 19 percent of respondents believe it's unpatriotic to buy non-American made vehicles. Another 28 percent said they'd only buy an American manufacturer when shopping for a vehicle, and 66 percent claim they research where a car is built or where an automaker is headquartered before buying. An impressive 82 percent believe that purchasing an American-made vehicle will create more jobs in the U.S.

Test Drive
2019 Jeep Cherokee Test Drive Review: In Too Deep
The 2019 Cherokee lives up to Jeep capability standards, but misses the mark on practicality and value for crossover shoppers.

First Look
2018 Jeep Cherokee First Look Review: Brings a New Nose and More
How will it fare against its worthy competition? 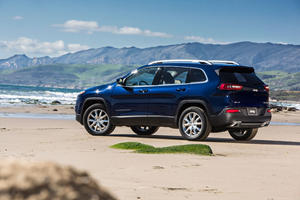