But will it be a proper sports car?

Those with a short term memory may not remember Lexus' incredible LF-LC concept that was revealed in 2012, and that's okay. The automaker has just unveiled the gorgeous 2017 Lexus LC 500, which is set to become the brand's flagship model. Incredibly, the muscular coupe has the same naturally-aspirated 5.0-liter V8 out of the RC F and the GS F and looks extremely similar to the original concept that we first saw a few years ago. With its astonishing looks, 467 hp and luxurious feel, this vehicle will hopefully bring Lexus out of the shadows.

Lexus Chief Branding Officer and Master Driver Akio Toyoda started the LC 500's reveal by stating that the automaker had been accused of being "bland" and "boring," and that the brand needed to properly define itself. Lexus has definitely fixed all of those issues with the LC 500. "Everyone, including the engineers, wanted to keep this car as close as possible to the original concept," stated Toyoda. Besides the sports-car like performance, the body sits on a brand-new, rear-wheel-drive platform, which is referred to as the GA-L. Lexus states that the platform puts an emphasis on a low center of gravity and weight distribution, as well as carbon-fiber, aluminum and composite bodywork.

This means that the LC 500 has a weight distribution of 52/48 front/rear. "The LC 500 has been an important product for Lexus and me personally," stated Toyoda. "This flagship luxury coupe's proportions, stunning design and performance make a strong statement about our brand's emotional direction and will grow the Lexus luxury appeal globally." The LC 500 puts its 467 hp and 389 lb-ft of torque down in with a new 10-speed automatic transmission, which helps the coupe get to 60 mph in "less than 4.5 seconds." The brand has also put a premium on luxury with the LC 500's interior as this four-seater has an optional Mark Levinson audio package and all of the latest safety features. Look out for the breathtaking coupe to hit the market next year. 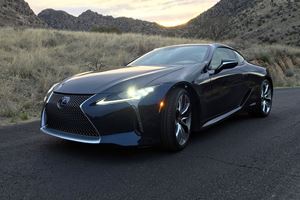