Could it borrow from the RAV4 Prime?

For a company so committed to electrification, it seems odd that Lexus doesn't have a single plug-in hybrid or electric vehicle in its lineup. There is an electric UX in Europe, but it isn't coming to the United States, so when will we get a Lexus with a plug? Well, according to a patent filing uncovered by the Rivian Owners Forum, it should be pretty soon. Lexus recently filed for the name 'RX450h+' with the European Union Intellectual Property Office (EUIPO).

The filing clearly points to a plug-in variant of the 2021 Lexus RX Hybrid. We've never seen a plus sign tacked at the end of a production Lexus model name, meaning this could act as the company's PHEV naming scheme moving forward.

Lexus filed for the term on October 6, 2020, so the RX450h+ is likely pretty far off from production. Earlier this year, the company also filed for the name NX450h+, hinting that its compact SUV will also receive a PHEV variant. We expect both the NX and RX PHEV models to borrow the drivetrain from the Toyota RAV4 Prime, which pairs a 2.5-liter four-cylinder with two electric motors driving all four wheels.

In the RAV4 Prime, this drivetrain produces a healthy 302 horsepower while enabling an electric driving range of 39 miles. Lexus could up the power slightly, but we don't expect a massive increase for either model.

The Lexus NX is long overdue for a replacement and even after a recent facelift, the RX is aging as well. We assume the 450h+ models won't arrive until the next-generation, by which time Toyota should have a greater capacity to manufacture the PHEV drivetrain in larger volumes. The RAV4 Prime is currently in short supply, making it difficult for owners to purchase Toyota's most powerful PHEV model without paying a dealer markup. 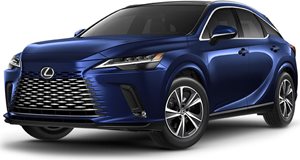