The New Ford Ranger Raptor Proves It Can Tow

The next-gen small Raptor IS expected to go on sale in America.

Now that the new Ford F-150 Raptor has been unleashed for the US, the company is working on its smaller sibling: the next-generation Ranger Raptor. While the current model remains forbidden fruit in America, the next one will be available for US customers who don't need an off-roader as gargantuan as the full-size F-150 Raptor.

As the development of the new Ranger Raptor continues, The Fast Lane Truck spotted a camouflaged prototype filling up at a gas station and started filming. The prototype is heavily camouflaged, but judging by the chunky tires and the width of the truck it appears to be the hardcore Raptor variant.

Ford hasn't announced a towing capacity for the new Ranger Raptor yet, but the prototype leaves the gas station hauling a trailer, showing off its capability for the camera.

With the towing package installed, the current Ranger has a capacity of 7,500 pounds. Europe's current Ranger Raptor, on the other hand, can tow up to around 5,500 pounds. Judging from the video, the new truck will have a much higher towing capacity as the trailer it was pulling looks very heavy and is clearly putting the prototype under a lot of strain, causing it to squat. The Fast Lane Truck estimates that the trailer weighed around 6,000-7,000 pounds.

Most of the styling details are covered by the camouflage, but it can't hide the Ranger Raptor's flared fenders and side steps. It also looks like the F-150 Raptor's new C-shaped LED headlights and daytime running lights have carried over to the Ranger Raptor.

Under the hood, the new Ranger Raptor is expected to use the same 3.0-liter twin-turbo EcoBoost as the Ford Explorer, paired to a 10-speed automatic transmission. In that application it makes 400 hp and 415 lb-ft. Previous rumors have claimed it will pack a 2.7-liter EcoBoost V6 with over 330 hp. For reference, the European-spec Ranger Raptor has a 2.0-liter four-cylinder turbodiesel rated at 269 hp and 369 lb-ft. The new Ranger Raptor is expected to debut next year and go on sale for the 2023 model year. 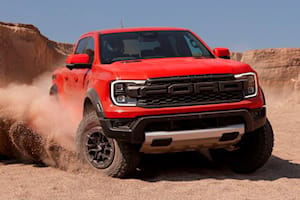