The Toyota Avalon TRD Will Be A Future Collectible

It's rarer than most Ferrari models.

Full-size sedans are a dying breed. The 2022 Toyota Avalon is the most recent example, and will not be renewed for another model year, putting an end to a nameplate that's been in production since 1994. Toyota is far from the first automaker to discontinue its full-size sedan, as the Avalon joins former competitors - like the Chevrolet Impala, Ford Taurus, Hyundai Azera, and Kia Cadenza - in retirement.

As we bid a final goodbye to the Avalon in 2022, now is the perfect time to look back at the sportiest variant it ever spawned. In 2018, Toyota announced it would make sporty TRD versions of its Avalon and Camry models, causing a few people to scratch their heads. The skepticism didn't result in massive sales, and as a result, the Avalon TRD is pretty rare.

Speaking with CarBuzz, a Toyota spokesperson confirmed, "total sales of 2020 and 2021 model year Avalon TRD are 3,852 units through November 2021." The Avalon TRD originally went on sale in August 2019 and only lasted for two model years. Though the Camry TRD soldiers on for the 2022 model year, the 2022 Avalon no longer has a TRD trim.

Selling just 3,852 units puts the Avalon TRD into rarified air. Including the coupe and the convertible Aperta model, around 3,499 units of the Ferrari 458 Speciale (a car that is literally named special) were sold globally. That number is roughly the same for the 488 Pista. Remember, these are limited-production supercars that command hundreds of thousands of dollars over their original MSRP on the used market.

We aren't saying the TRD should cost the same as a special edition Ferrari, but surely it will command higher values than a standard Avalon in the future. It didn't receive any power upgrades, but the Avalon TRD got some interesting touches like a factory cat-back exhaust, firmer coil springs, stiffer front and rear swaybars, and sporty TRD wheels. The Avalon TRD was a bold move for Toyota, and we are sad to see it go. With the low production volume, perhaps it won't be long before low-mileage examples start selling for big money on auction sites. 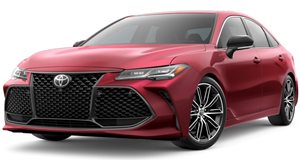