Now the whole family can enjoy a track-focused BMW.

It is no secret BMW has been working on an M version of the X3 SUV, which is rumored to pack a 450-horsepower twin-turbo inline-six. This high-performance SUV will go to battle with models such as the Alfa Romeo Stelvio Quadrifoglio, Mercedes GLC63 AMG, and recently revealed Jaguar F-Pace SVR. We have no doubt the X3 M will be competitive in this segment, but BMW may have a secret weapon in store. According to Motor.es, the X3 M may be the first BMW SUV to receive a Competition Package.

We have recently seen how a Competition Package greatly increased the performance of the M2, so there is no telling what it could do for the X3 M. The report claims the package could add as much as 25 hp to bring the total to 475. This is still off the mark of rivals from Jaguar and Mercedes, but BMW has always been competitive even with less power under the hood. Since the X3 M hasn't even been revealed yet, it is difficult to speculate on how hardcore a Competition Package model could be. Clearly it won't add a completely new engine as in the M2, but it will likely bring in stiffer suspension, better handling, more aggressive looks, and weight reduction.

The X3 M is expected to be revealed by the end of the year, so we should have our answers soon. Judging by how late in the product cycle the Competition Package arrived for the M2, M3, and M4, we doubt it will be available at launch for the X3 M. 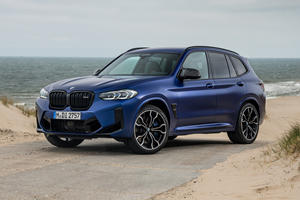 First Look
2022 BMW X3 M First Look Review: A Splash Of M3 In An SUV
Now with more torque and some brighter colors.