This can't be serious, can it?

The minivan segment is not what it once was, and likely never will be again. Prior to the relentless crossover invasion, minivans were fairly popular in America, themselves replacing the traditional station wagon as the preferred family hauler. Over time, minivans became more and more luxurious, such as today's Chrysler Pacifica. Even the Honda Odyssey when fully equipped borders on premium and outright luxury. But is there enough market space for a luxury minivan from Lexus? Say a more luxurious version of the Toyota Sienna? Well, probably not.

But according to Lexus Enthusiast, via Auto Industriya, the president of Lexus Manila, Raymond Rodriguez, said "It's only a matter of time. As a luxury automaker, Lexus does not want to be left behind." Manila? Really? Actually, it does make some sense because Mercedes-Benz sells vans in the Philippines and Lexus is determined to take on the German luxury brands wherever it sees fit.

It's also worth noting that minivans, particularly luxury minivans, remain relatively popular outside of North America, specifically in Eastern Europe, Japan, and other parts of Asia. How come?

For the same reason as long wheelbase luxury sedans: people like to be chauffeured around town in them. Luxury minivans can actually offer more legroom and overall general comfort than the Lexus LS flagship sedan. So don't be at all surprised to see a Lexus minivan debut in the very near future, just not in North America.

Question is, will it be an all-new vehicle from scratch or based on an existing minivan/sedan? Rule out the Sienna first and foremost because it's for North America only. This leaves one specific contender: the Toyota Alphard, a luxury minivan with the face of a Galactic Empire and/or First Order stormtrooper. It's been in production since 2002 and the second generation launched in 2015. With a face only a mother could love, there's no way it'd make it in America. 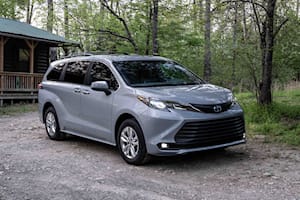