And it's not ending anytime soon.

Let's face it: America loves SUVs. And trucks. Sedans? Not so much these days. Automakers are quickly responding to this market shift and the results are more SUV crossovers than ever before. We say "crossovers" because a vast majority of these vehicles are car-based, as opposed to a body-on-frame chassis, such as the Ford Expedition. Smaller crossovers have been around for quite some time, but now automakers are going all-in with large three-row offerings.

Hyundai and Kia are two new players in this segment with the Palisade and Telluride, respectively. While both share a common (car) platform, these big rigs also have big sales expectations as they face off against the Ford Explorer, Chevrolet Traverse, Subaru Ascent, and Volkswagen Atlas. Automotive News did some digging and found that, so far, the Telluride is winning with Americans.

In its first two months of sales in the US, a total of 10,965 units were sold. Last month, it was Kia's fastest-turning model, according to Kia's VP of sales and operations for the US, Bill Peffer. Built in Georgia, the Telluride accounted for over 10 percent of Kia's sales in April alone, with a total of 5,570 units sold. The Hyundai Palisade will go on sale this summer and it's also expected to be a solid sales success. Hyundai and Kia were previously lacking in this segment and have since backed away from large sedans. But at the same time, the competition for these large three-row SUV crossovers has gotten hotter than ever.

"Up until a year and a half ago, give or take, if you produced an SUV, that's pretty much all you had to do," said Karl Brauer, executive publisher of Autotrader and Kelley Blue Book. "It didn't have to be a great SUV, or a perfectly styled SUV. Now, there's so many SUVs that the market is saturated with them."

Automakers have to produce not only higher quality vehicles, but also SUVs that people actually want to buy in accordance with their lifestyles. For example, while the Telluride has a more rugged exterior design and a definitive off-road focus, the Palisade is more of a luxury cruiser. There will hopefully be little to no internal competition.

But it's not just Hyundai and Kia that had to step up their game. Why? Because "customer loyalty and brand perception are looser than ever before," according to Jessica Caldwell, executive director of data strategy at Edmunds. With the South Korean sister brands now going all-in with big SUVs, as well as first-timers Subaru and VW, segment veterans like Ford and Chevrolet can't afford to lose any focus. 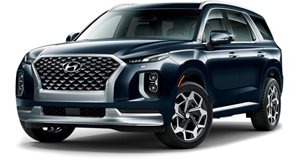