The iX2 is not as polished as we first thought.

Last week, we got our first look at the all-electric BMW iX2, a new electric crossover joining the already-confirmed BMW i4 and BMW iX3 – or so we thought. A BMW X2 prototype was spotted cold-weather testing in Sweden. It was uncamouflaged and looked identical to the regular version, but a conspicuous "electric test vehicle" sticker adorning the side suggested that a fully electric version of BMW's compact crossover is in development.

However, sources have confirmed to BMW Blog that BMW has "no current plans" to offer an electric crossover based on the X2 model.

Instead, we were most likely looking at a new plug-in hybrid variant of the X2 expected to arrive within the next year and use similar drivetrain to the X1 PHEV sold in Europe and China. This doesn't mean an electric BMW iX2 won't ever happen, but it makes sense for BMW to focus on developing the iX3 and iX1, which are based on the more established X3 and X4 models.

The X1 plug-in hybrid uses a 1.5 liter, three-cylinder gasoline engine and an electric powertrain powering the rear wheels. Combined, this setup generates 220 horsepower and 284 lb-ft of torque, while a 9.7 kWh battery pack enables an electric range of 35 miles. Since the X2 is based on the X1, this setup is likely to carry over to the X2 PHEV.

While the BMW X2 won't get the fully electric treatment, BMW Blog's sources have confirmed its smaller X1 sibling will get an electric version for the next generation. The redesigned X1 is expected to arrive in 2022, so the EV version should launch soon after the regular combustion-powered version.

It will be one of 12 fully electric vehicles BMW plans to launch by 2023. Next year will see the launch of the BMW iX3 and Mini Cooper SE, while the iNext SUV and BMW i4 sedan will debut in 2021. 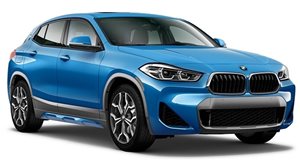