BMW's production of the all new M4 last year changed the sports car game. Buyers were finally allowed to purchase the track-oriented coupe they craved while maintaining all the necessary luxuries of a proper premium sedan. Now what did the other top German performance brand, Mercedes-Benz, respond with? Its answer was a heavily updated 2017 C63 AMG coupe. Based on previous generations of this car, we can expect it to be high-tech, gorgeous, luxurious and quick.

Its official reveal date is August 19, but Mercedes teased us again with photos of it lapping the Hockenheim track in Germany. When it officially debuts, a new report indicates that the C63 AMG will share engine options with the new AMG GT and GT S. If that turns out to be the case the C63 will house a 4.0 liter twin-turbo V8 producing 469 or 503 horsepower, depending on the trim. That would make it a viable competitor to the M4 and the Audi RS5, considering they only pump out 425 and 450 horsepower, respectively. The photos MB released show the C63 wearing camo, but we still get a good sense of the jaw-dropping styling that the updated coupe is going to be sporting come its official release. 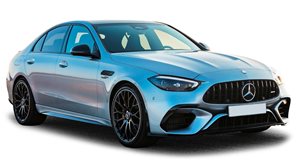 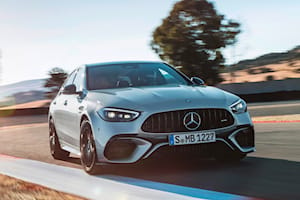