March 31st marks the completion of Subaru's fiscal year, and after tallying up sales and revenue and compiling it all for its Fiscal Year-End report, the Japanese automaker's 2019 sales and financial numbers have been sent out from its Tokyo offices for us to see. A glance at the page-long report uncovers that things aren't looking very good for Subaru these days. That's not something one would expect since Subaru's strong portfolio of all-wheel drive crossovers has positioned the automaker in exactly the right place to be during this CUV craze.

Despite having recently put its three-row Ascent on sale in the US, Subaru ended its fiscal year with a net decline in operating income, which is down to 195.5 billion yen (almost $1.8 billion at today's exchange rates). That represents a steep 48.5% decrease in operating income from the year before, with net income (the money Subaru took in after taxes and other costs are factored in) falling by 48.3% over the past year.

In any industry, seeing your income halve is not good news, but that's especially the case in the auto industry where expenses are high and margins are, many times, razor thin. The drop in incoming cash can partially be explained by sales, which dipped 6.3% globally, but slow product movement doesn't tell the full story. According to the automaker, it was a number of recalls and quality control measures that hurt Subaru's pocketbooks the most.

Last January, Subaru's Yajima factory, the company's only Japanese factory and the plant responsible for 60% of the automaker's output, ground to a halt for ten days as technicians addressed issues with electric power steering units on the Forester and Crosstrek. That happened not long after Subaru recalled a quarter million Legacys and Outbacks for faulty fuel range readings, which itself took place after Subaru was caught cheating on emissions standards in Japan and was forced to recall 0.5 million vehicles.

Despite an even bigger recall after that, one consisting of 2.3 million models with bad brake lights, Subaru is optimistic about the year ahead. It predicts that sales around the world will grow to 1.56 million sales, which represents a 5.6% increase, with much of that growth taking place in the North American market. As long as Subaru can steer clear of recalls and the bad press that comes from cheating, 2020 could represent yet another year where the small automaker continues its rise to prominence.

Model Overview
2020 Volkswagen Atlas Review: The SUV For Everyone 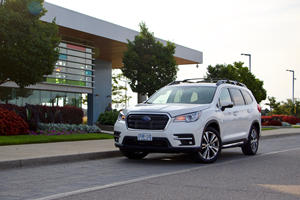