This 1949 Ford Shoebox Has The Heart Of A BMW

This is one wild SEMA build.

The SEMA Show religiously attracts some of the wildest creations in the automotive industry, and we've been blown away by this year's entries. Ford in particular had a good showing, with some insane builds including a range of buck-wild Broncos and even a 1,000 horsepower Ford F-350. While newer cars showcase all the latest offerings in the aftermarket scene, older custom cars still have a special place at SEMA, and this 1949 Ford Shoebox has to be one of the coolest retro mods we've seen. Built by Maniacs Garage, this chopped and rodded Ford holds a few secrets that few can guess.

This car was found by John from Maniacs Garage as a half-abandoned project. The previous owners had started a roof chop on the car around 20 years ago and never finished it. John and his team then spent close to two years completing this machine. The Maniacs took on this project but decided to go for something completely different than your standard restoration. They went for a complete body swap, and the donor car is not what you'd expect at all. This 1949 Ford now sits atop the chassis and drivetrain of a 2008 BMW 335i.

Maniacs Garage started by chopping the 70-year-old Ford off of its own body, and did the same to the BMW after which a ton of fabrication went into fitting the Ford to the German base. The amazing part is that both cars cost a total of $3,400. The car now rolls on a set of custom 20-inch Hostile wheels and adjustable coilovers which required the team to widen the body and add massive flared wheel arches.

The swap went so smoothly that this Ford has the original BMW factory air conditioning and heating system, and the total thing weighs only 3,300 pounds, with a length of 16 feet.

The team then decided to add some JDM flavor by adding drift-spec aero, including a massive front splitter and rear spoiler. The body remains bare steel, which isn't a bad thing at all. On the inside, this car features a pair of red suede Status racing seats, and a Status racing steering wheel. Under the hood, the BMW's N54 3.0-liter inline-six engine now features a single-mount Garrett G30-700 turbo jutting from the hood running on JB4 electronics.

According to Maniacs Garage, this setup is capable of producing 700 horses but current figures aren't known. This build takes a bit from every car subgenre, and the end result is pretty damn sweet. 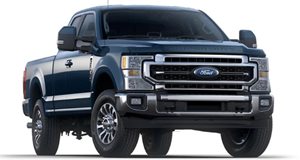