It's also a pretty rare find.

The outgoing C7 Chevrolet Corvette ZR1 is the fourth Corvette to bear that moniker and its three predecessors were all very impressive for their respective eras. Those of us who grew up in the 1990s will fondly remember the C4 ZR-1 (yes, the dash mark was part of the name). Perhaps the biggest reason why the C4 ZR-1 immediately draws praise is that Lotus was heavily involved in its development.

Conveniently enough, GM purchased Group Lotus in 1986 and it didn't take long for the Corvette team to approach their new UK colleagues with an idea to build the ultimate Vette. It had one main goal: to be the world's fastest production car. But first, it needed the right engine, a task given to Lotus. The result was the LT5 V8, featuring four overhead camshafts and 32 valves. Total output came to 375 horsepower. Lotus also assisted GM with the braking and steering systems.

But when it came time to build the new engine, it was discovered it required special assembly, a task the Bowling Green, Kentucky Corvette factory wasn't equipped to handle.

Instead, GM contracted Mercury Marine. Yes, the company that builds boat engines. It took a pair of ZR-1 V8s, slightly modified them for more power, and installed them on a one-off speedboat for the company's president. He called it the "Wet Vette."

The C4 ZR-1 made its big debut at the 1989 Geneva Motor Show and went on sale a few months later. Only a coupe body style with a removable roof panel was built. Compared to a regular C4, the ZR-1 had a wider rear end and rear wheels and unique rear fascia. A ZR-1 badge was also found at the rear. The styling changes weren't drastic but they became even less noticeable the following year when Chevy decided to adopt the ZR-1's rear styling to the entire C4 lineup.

Several other upgrades took place throughout the ZR-1's lifetime, such as a power increase to 405 hp and 385 lb-ft of torque, modified exhaust system, and the addition of traction control. A six-speed manual was the sole transmission.

As for performance, the ZR-1 was capable of going from 0 to 60 mph 4.4 seconds and hit a top speed of over 180 mph. Both figures were impressive for the time. A ZR-1 also set seven world records at a Texas test track in early 1990.

Up for sale on Bring A Trailer is this 1995 Corvette ZR-1 with only 26 miles. The dealer acquired the car in 2012 and, well, it pretty much continued to sit untouched. The Torch Red exterior looks flawless, as does the black leather upholstery. The sale includes a pair of roof panels, the original window sticker and factory build sheet, and a clean title. As of this writing, the highest bid was just $40,000 but we won't know the final price until the gavel drops on August 19.

Video
The Ford F-150 Is Officially An Emoji 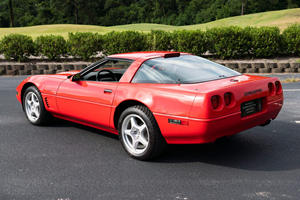 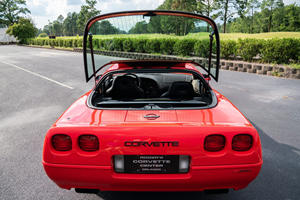 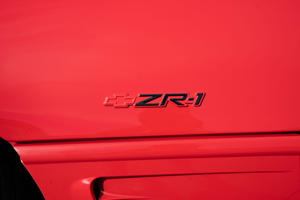 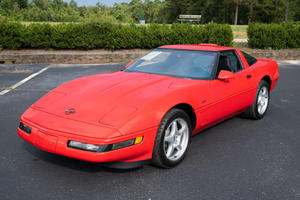 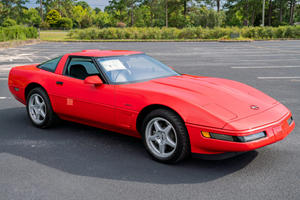