This BMW 8 Series Is More Powerful Than An M8 Competition

Thanks to Manhart, the M850i convertible is now more powerful than the M8 Competition.

The BMW 8 Series is one of the most powerful and most luxurious grand tourers in its class, but Manhart clearly wasn't satisfied with its performance. Last year, the tuner built the world's fastest BMW M8 Competition with 823 horsepower and 774 lb-ft of torque, resulting in supercar levels of performance. Now, the German tuner has turned its attention to the BMW 8 Series Convertible, specifically the sporty M850i convertible - and the result is the MH8 700 Cabriolet.

This massive power boost was achieved thanks to an ECU remap, upgraded turbochargers, a new intercooler, and sports air filters. Manhart hasn't said how these upgrades have affected the performance, but the MH8 700 Cabriolet will be quicker than the M850i, which can sprint from 0-60 mph in 4.6 seconds and hit a top speed of 155 mph.

In addition, Manhart has added a stainless-steel exhaust system with valve control that makes the V8 sound more vicious and four stylish carbon or ceramic-coated tailpipes. Race downpipes without a catalytic converter and OPF-delete replacement pipes are also available. The eight-speed automatic has been upgraded to help the transmission cope with all that extra power too.

The brakes have been left stock, but the suspension has been upgraded with H&R springs that lower the car by 1.2 inches.

Visually, the MH8 700 Cabriolet gets some sporty cosmetic upgrades that help it stand out from its regular M850i sibling. These upgrades include new front and rear spoilers and a diffuser made from carbon fiber, and the exterior is finished in Manhart's signature black and gold color scheme. The MH8 700 Cabriolet rides on custom 20-inch Manhart Concave One wrapped in performance tires measuring 245/35 at the front and 275/30 at the rear. Inside, carbon-fiber accents are applied to the steering wheel and carbon shift paddles. No pricing details have been announced, but the donor car will set you back $109,400. 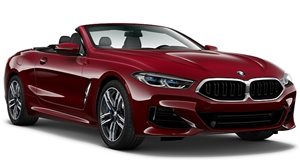