Cadillac's last attempt at a flagship sports car that wasn't a sedan-based V-series, the XLR, hardly made the splash on the market that we're sure GM was hoping for. It was a short-lived thing, lasting just six years on the market before abysmal sales relegated it to the trash bin.

But now that General Motors is so committed to electric propulsion, and has put Cadillac at the fore of its EV aspirations, the brand has a golden opportunity to try its hand at the high-performance sports car market again, only with AC motors and a battery pack instead of a gas-guzzling big-displacement V8. These sketches show just what that could look like.

The sketches come straight from GM's design team, and they were published to Instagram with the caption "A great mix of sheer surfaces and muscular forms. Speedy lookin' sketch by [Exteriors Creative Designer Tom Grech]." Obviously, the fact that GM has released this sketch suggests that, in all likelihood, this design will never inform an actual, real-life product, but it at least shows us where Cadillac's head is at with regard to how to pen a sleek electric supercar.

The sketch depicts a wide, low-slung machine with big blade-spoke wheels sitting quite flush with the bodywork. The front fascia doesn't look too dissimilar from what's on the forthcoming Cadillac Lyriq, albeit with a front splitter for supercar-like downforce. Most intriguing of all, the car has a single, centered tail fin - a callback, perhaps, to the twin tail fins that adorned so many classic Cadillacs from the mid-1900s.

Overall, it's a unique, interesting take on what a future electric supercar might look like from Cadillac, although as of yet, we have little indication that Cadillac has any desire to enter that segment. The forthcoming Cadillac Celestiq electric flagship will occupy an entirely different space, as an opulent, hand-built luxury statement car more akin to a Bentley than a Lamborghini.

But who knows? Maybe Cadillac will prove us wrong. 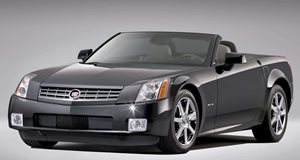