This Guy Scorched Two SUVs With Gasoline And A Flare Gun

Think he did this on purpose?

Parking your car in the street comes with inherent dangers. Theft and vandalism are the two major ones, and while a security camera won't stop either, it can help identify culprits and give them a good reason to move on to another target. Or, in this bizarre case caught on camera in New Orleans neighborhood, provide footage of a third-generation Toyota Highlander soaked in gasoline while a man fires what looks like a flare gun at it.

The erupting fire then spectacularly takes the SUV parked directly behind with it. The home security footage captures the whole incident and the resulting small explosions as the vehicles burn.

According to WWLTV, a neighbor named Quinn Eagan heard the explosion and dashed outside to see what had happened. "I grabbed the neighbors garden hose over here and just started trying to put it out and then when the thing started exploding, I hid behind the tree over here and kept spraying and just realized it's futile," he told the news channel.

Pouring water on a gasoline fire generally does more harm than good, but the SUVs were clearly lost already. Thankfully, both vehicles were far enough away from the houses not to do any further damage, although a couple of trees got scorched. According to Eagon, the figure firing the flare gun did so from around 15-feet away. In the pictures, we can also see the gas can that was left on the hood of the target SUV.

It's reported that neighbors believe the Highlander's owner knows the culprit, which is believable. People don't generally have flare guns and a vessel full of gasoline on their person, so it was likely planned for a specific target. Whether it was planned as intimidation or revenge, investigators may know who was responsible. It's not just the police who are interested in finding the perpetrator though, the New Orleans Fire Department is also looking into the fires and an arson investigation is active. 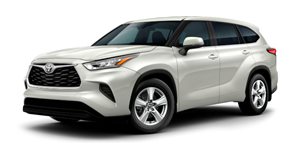