This Is An Air-Cooled Porsche 911 GT2, It's Worth $1 Million And Going Up For Auction

Who wouldn't want a car called "The Widowmaker"?

There is some debate about what could be called the ultimate Porsche 911. For some, the engine has to be air-cooled in order to count, making anything made after the Type 993 ineligible. And since the GT1 was technically water-cooled, despite being based off the 993, the 993 GT2 is definitely a contender for the title of ultimate 911. It's based on the Turbo model, but with the boost turned up in order to produce 430 horsepower, quite a bit for 993.

This was the first generation of the GT2, and therefore the most power that Porsche had ever sent to just the rear wheels of a road car. This is how it earned the nickname "Widowmaker", although in fairness, a lot of cars have had that nickname. This one is going up for auction soon. Originally one of only 17 sold in Japan, it was imported to the US and owned by "a well known Porsche enthusiast" (we think it would be cool if that was Jerry Seinfeld, but have no evidence of it) and has 22,000 miles on it. The car is valued at about $1 million dollars, but estimates show it could go for up to $1.2 million. 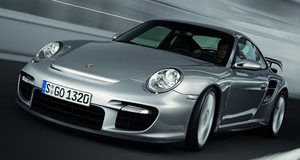