This Is The 2014 Jeep Cherokee

The legendary name returns to the Jeep lineup but will its polarizing front-end design dismay brand loyalists?

After some images of the all-new 2014 Jeep Cherokee were leaked online a day ago, Jeep made the wise decision to release some pictures of its own of the new SUV. And its design is interesting, to say the least. In fact, it's downright polarizing. What you're looking at are official photos of the new Jeep Cherokee which will replace the Liberty in the brand's lineup. We've seen spy shots of the vehicle testing previously but only now are we able to see its radical front-end design.

Jeep has so far not released any specs but previous reports suggest that the Cherokee rides on the same Alfa-Romeo platform that underpins the Dodge Dart. So in other words, this means the new Cherokee will likely come standard with front-wheel-drive and have optional all-wheel-drive. Jeep also promises the Cherokee will have at least a 45 percent fuel efficiency improvement over the old Liberty. Set to have its official debut at the New York Auto Show next month, sales will begin later this year and production will take place at Jeep's Toledo, Ohio facility. 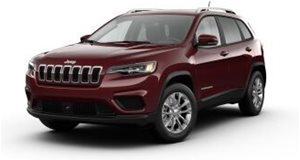 Test Drive
2019 Jeep Cherokee Test Drive Review: In Too Deep
The 2019 Cherokee lives up to Jeep capability standards, but misses the mark on practicality and value for crossover shoppers.