But Mini didn't actually design it.

The Mini brand has come a long way from its humble origins as a tiny city vehicle for the masses. The company's vehicles have grown over the years, culminating in the not-so-small Countryman SUV. But there has been some chatter about the Mini brand returning to its roots with a next-generation Cooper that is smaller than the current model. Such an idea was teased several years ago with a concept car called the Rocketman, but sadly, it never reached production.

We still believe Mini should build a smaller vehicle and with the recent introduction of the electric Cooper SE, the idea seems more possible than ever. Mini may not have any plans for the Rocketman but an art student named Sean Keunyoung, who studies at the Korean National University of Art, had a unique idea of his own for a smaller Mini model.

Keunyoung calls his creation the Tomboy, a modern interpretation of a small, electric Mini Cooper. The Tomboy was part of a team project for one of Keunyoung's classes but we think the sketches look real enough to have come from Mini itself. The front end looks like a futuristic interpretation of the current Mini design while the rear end is a more radical departure from any production Mini.

Speaking of the back end, this is a small two-seater car but it maximizes its space. The rear storage area opens up to reveal a trunk with segmented shelves, which are perfect for smaller items like shoes, bottles, and what appears to be a pair of scuba flippers. Keunyoung has also envisioned roof-mounted storage for a snowboard or surfboard with an interior passthrough for skis.

Keunyoung even posted a few images of what the interior could look like. It uses a minimalistic design but also takes design inspiration (like the circular center display) from modern Mini vehicles. The Mini Tomboy Concept is just a student's design study, so there's almost no chance it reaches production or gets turned into a full-size 3D car. Still, we hope Mini takes note of it and incorporates some of this excellent design into future models. Or hires Keunyoung as a designer. 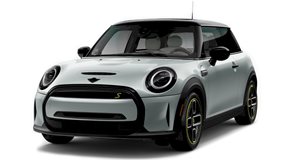