Taking The BMW X7 To The Extreme

However unlikely, these renderings take the big new Bimmer to extremes.

BMW has a reputation for producing as many variants of a new model as it can – not just more engine options, but new body-styles, too. So after the release of the new 3 Series, for example, we're looking forward to seeing new wagon and GT versions, along with a new 4 Series coupe, convertible, and four-door Gran Coupe.

The jury's still out on what it might do with its new flagship X7 crossover, charting as it does new territory for the Bavarian automaker. But that isn't about to stop rendering artists from filling in the blanks, like Nikita Aksyonov has released on Behance.

Now some of these seem more likely than others. There'll probably be some sort of performance version, for example, though it's more likely to adopt the second-tier M Performance treatment (like the M760i sedan) than the full-on M approach (like the X5 M and X6 M). But in a market craving for ever more expensive and powerful luxury crossovers, we wouldn't be the least bit surprised to see BMW push the new X7 into higher territory. There's a lot of room for it to grow, price-wise, before it starts impeding on the Rolls-Royce Cullinan, after all.

There'll surely be those who modify the big crossover beyond what the factory intended, too – alternately dropping it to the tarmac with a wider and lower stance, or jacking it up for venturing off-road. But as far as rival Mercedes has pushed its top SUVs, we wouldn't expect BMW (or anyone modifying its products) to turn the X7 into a pickup, much less a six-wheeler like the G63 AMG 6x6. But it doesn't hurt to fantasize. So flip through and enjoy. Just don't expect to see many (if any) of them ever to see the light of day. 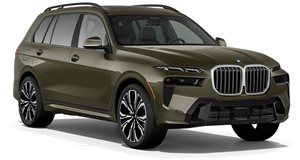