This Is What The New VW Taos Will Look Like

It's going to be an attractive little SUV.

Some time back, Volkswagen decided that the Touareg was no longer worthy of the American market and axed it, but that decision didn't mean that the company would be producing fewer SUVs. In fact, since then, we've had the Atlas and Tiguan while other markets have gained the Nivus. We're also awaiting the arrival of the Tiguan X coupe-SUV, but there's still more on the way.

The latest VW-badged SUV is the Taos, and it's been teased with a trippy camouflage wrap that does very little to disguise the new model's looks. Nevertheless, we can't wait for the October 13 reveal and have taken it upon ourselves to show you what it will look like.

The most obvious design feature - one that doesn't require our Photoshop skills to notice - is the new honeycomb front grille with an LED running straight through it. Below that is another, larger grille and some R-style intakes that look just sporty enough for the new compact SUV. Coupled with black plastic rocker panels and bumper trim, as well as squared wheel arches and a high beltline, the Taos will be the perfect blend of sporty design mixed with some off-road styling touches. This should make it a firm favorite for those who want something practical and stylish but don't want the added size of the Tiguan.

In terms of camouflage attempts, this is probably one of the weakest efforts yet, as there's not much hidden by the funky wrap. Nevertheless, there'll be plenty to talk about when we get to see the interior and some other details that may be hiding in plain sight. For now, we know that it will be powered by a 1.5-liter turbo-four producing 158 horsepower and 184 lb-ft of torque. FWD models will use an eight-speed automatic transmission while AWD models will get a seven-speed dual-clutch automatic. It's to be built at VW's Mexican Puebla plant, with sales expected to begin from the summer of 2021. 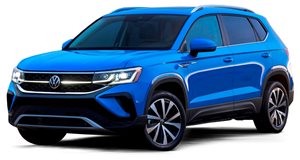 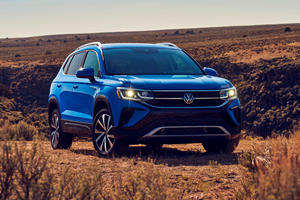 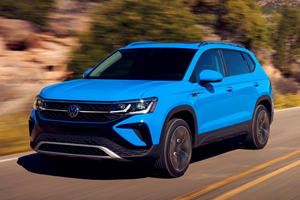