This Is When The Subaru Solterra EV Will Be Revealed

Subaru's first EV is less than two weeks away.

Unlike most of the motoring world, Japanese automakers have been somewhat slow to the electric vehicle party. Toyota has openly criticized the push towards a world of EV exclusivity, with CEO Akio Toyoda claiming that, "in achieving carbon neutrality, the enemy is carbon dioxide, not internal combustion." But Toyota has just revealed the details of its first dedicated EV, the bZ4X, Mazda has the MX-30, and Subaru has been engaging in a long teaser campaign for its own EV SUV - the Solterra. We now know when the Subaru Solterra will be unveiled in full, as Subaru has confirmed on social media that a world premiere will take place on November 10 at 20:30 EST.

Subaru's teaser campaign has left little to the imagination. We've known for some time that Subaru and Toyota were partnering on an EV SUV, and it's become apparent that the bZ4X and Solterra will essentially be the same vehicle, right down to almost identical interiors. While the Toyota version is available in both front- and all-wheel drive, Subaru has already confirmed that the Solterra will be AWD-only in keeping with its tradition of all-wheel-drive vehicles. That means the Solterra will have 214 horsepower and take 7.7 seconds to reach 62 mph.

The Solterra will be built on the e-SUBARU Global Platform, and will be the brand's most technologically advanced vehicle yet.

Subaru has launched a dedicated website for the Solterra, including a YouTube link where fans can watch the official unveiling.

The Solterra does not mark the first time that Subaru and Toyota have collaborated on vehicles together. Both the first and second generations of BRZ and 86 sports cars were co-developed, and Toyota has partnered with numerous automakers including BMW on the GR Supra and Suzuki on several global market products. 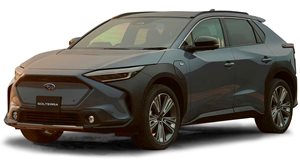