You wouldn't know it by looking inside the new 7 Series.

It's been over 20 years since BMW introduced a center dashboard screen that was manipulated by a physical iDrive controller in the E65 BMW 7 Series. That first iteration of iDrive was as user-friendly as a mattress made out of cement. Since then, infotainment systems and dash-mounted screens have become far better, but they have never managed to replace the tactility and simplicity of physical controls. As these screens become infinitely larger, one wonders when the obsession with big screens will end. According to the man responsible for BMW i interior design, these screens won't dominate car interiors forever.

Matthias Junghanns, Head of BMW i Interior Design, was participating in a roundtable webinar by Car Design News with fellow designers from Pininfarina and Polestar when he spoke about the future of car interiors. "Is it the big screen that counts?" questioned Junghanns. "I'm personally convinced that these black glass surfaces in the car interiors are… we will leave that behind, sooner or later."

It's somewhat ironic that Junghanns thinks big screens will be done away with at some point. After all, the new BMW 7 Series and i7 not only have dual 12.3-inch and 14.9-inch displays ahead of the driver but also an available 31.3-inch rear entertainment screen. 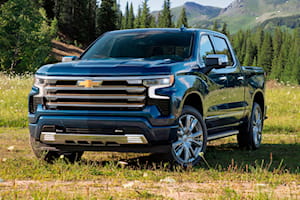 However, Junghanns elaborated on his statement by saying that car interior displays will only appear when needed. So instead of permanently dominating the dashboard and being a bit of an eyesore to some, the displays will be out of sight when you aren't using them. Perhaps in the style of Bentley's rotating display.

While BMW's iDrive, Uconnect from Stellantis, and Ford's SYNC infotainment systems are all good, they still use large screens that many of us find distracting. Other designers, including one from Polestar, supported the opinion of Junghanns. Earlier this year, we asked several automakers how they're approaching the issue of drivers being distracted by modern infotainment interfaces. The answers were interesting, but a move away from enormous, permanently visible screens will be challenging for engineers. As long as it contributes to safer driving, we're on board.