Toyota Avalon TRD's Benchmarks Are NOT Easy To Beat

At the same time, Toyota is convinced it will sell lots of them.

It has finally happened. After years of begging, Toyota has finally caved to our pleas to build more sporty TRD versions of its cars. So what are the first cars to come from this new wave of TRD models? A Corolla-based GTI fighter? Maybe a more powerful version of the Supra? Nope. Toyota has decided to give the TRD treatment to its mid-size Camry sedan and full-size Avalon sedan.

At this point, you may be saying, "Huh? Toyota built a sporty version of the Avalon, the car my grandparents used to own?" As we've said before, the newest Avalon is anything but a grandparent's car and the idea of a sporty version no longer seems farfetched. During a recent first drive event in Dallas, Texas for the Camry TRD and Avalon TRD, we had a chance to speak with Randy Stevens, Chief Engineer of the Avalon, to discuss why a TRD model makes sense right now.

Our first question for Stevens was an obvious one - was anyone asking for a TRD Avalon? "Just look at the TRD Off-Road and TRD Pro trucks, no one was necessarily asking for them," he replied. It is fitting that our first drive of the Avalon took place in Texas because Stevens says dealerships in the south are a big reason why the Avalon TRD was created. "Dealers in the south love to trick out their cars [with optional equipment]", Stevens explained. These dealer-modified cars tend to come with inflated price tags but southern dealerships have no trouble selling them quickly.

So instead of seeing a car with expensive dealer-installed wheels and appearance options, buyers will now be able to buy a factory-modified Avalon at a price that is more in line with other trim levels. In fact, the Avalon TRD starts at $42,300, making it $200 less than the Avalon Touring.

Although the Avalon TRD doesn't have an increase in output, the 3.5-liter V6 still produces a healthy 301 horsepower. Stevens said the goal with the Avalon TRD was to "make it perform better" and Toyota even benchmarked cars like the Ford Fusion Sport, Kia Stinger GT, and Audi A6 during development. The car's added performance comes mostly from a bevy of suspension modifications to improve yaw rate, steering precision, and body control.

Stevens also said the TRD models will be exclusive, with the Avalon being the rarer of the two. He expects to see around "5,000 to 6,000 Camry TRDs per year" but only around "2,400 Avalon TRDs." Both models are available with a TRD-exclusive shade of Supersonic Red but Toyota may offer different exclusive colors in subsequent model years, as it has done with the TRD Pro trucks. 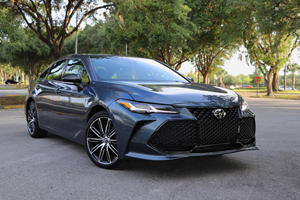