The lap times of the two sports cars are incredibly close.

While you might have been expecting the Toyota GR Supra to be compared with the BMW Z4 since both cars share the same straight-six engine, Auto Sport decided to pit the Japanese sports car against the mighty BMW M2 Competition Coupe. On paper, this may not seem like a fair comparison.

Under the hood, the BMW M2 Competition uses a twin-turbo 3.0-liter inline-six engine producing 410 horsepower and 405 lb-ft of torque. The Toyota GR Supra, on the other hand, uses the same 3.0-liter turbocharged straight-six as the BMW Z4 generating 382 hp and 368 lb-ft of torque.

A less powerful 2.0-liter four-cylinder turbo variant is also available with 255 hp and 295 lb-ft of torque. However, trips to the dyno have revealed the GR Supra is more powerful than Toyota claims, producing around 400 hp at the crank.

And to keep things fair, both cars were equipped with the same Michelin Pilot Super Sport tires. Both cars performed a hot lap around the circuit, and the times were a lot closer than you would think. The BMW M2 Competition lapped the Hockenheim-GP circuit in one minute and 58.4 seconds. The Toyota GR Supra? One minute and 58.9 seconds.

Despite having nearly 40 less hp according to Toyota, the GR Supra was only 0.4 seconds slower than the BMW. That's particularly impressive when you consider the huge price difference between the two models: the Toyota GR Supra 3.0 starts at $49,990, while the BMW M2 Competition will set you back at least $58,900. 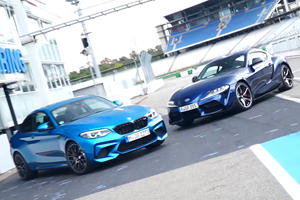 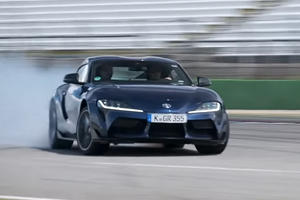 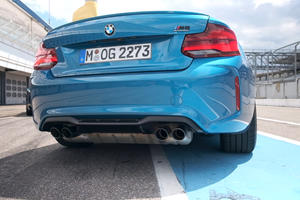 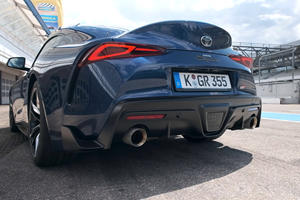 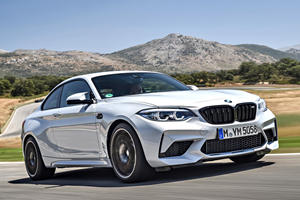